There have been many murders and villainous exploits in this large County over the years and many of them have become internationally renowned, but for today, I will concentrate on one event that is much less well known. The event which I’m going to tell you about took place in the middle of the day, on Friday, November 25th 1853 in the centre of Norfolk, between the villages of Wellingham and Tittleshall and involved a jeweller from Norwich. The unfortunate victim was Lorenz Beha, a watch-maker and dealer in jewellery, who lived in St. Stephen’s Plain, in Norwich and he occasionally travelled in the county to dispose of his goods. 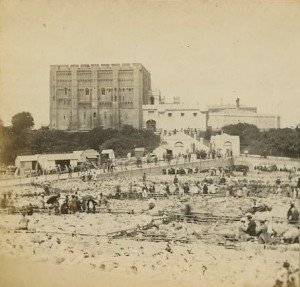 The Castle in Norwich.

It seems that about halfway between Wellingham and Tittleshall, a person travelling on the road, discovered a quantity of blood which led to a ditch. There he discovered the body of the murdered man. The head had almost been severed from the body, by a blow from the back and the face was dreadfully cut and mangled. A hatchet, such as was used for felling timber, was found nearby, covered in blood. The supposed contents of his pockets had been taken but a box of valuable jewellery had been left untouched.

A young man named William Thompson was arrested shortly after and was later tried for murder.

Another report of the murder appeared in The Household Narrative in 1853:

“Another barbarous Murder, with Highway Robbery, has been committed in Norfolk. The victim was Lorenzo Beha, a silversmith, who resided in Norwich. He had two assistants in his shop, to whom he left the care of his business while he travelled through the county to obtain orders and to sell his jewellery. He usually carried a box of gold and silver watches and other jewellery in a bag, suspended from a stick on his shoulder, and his custom was, when he sold goods to the country people, to take payment in small instalments. He was last seen alive, walking towards the village of Wellingham, about one o’clock on Friday, the 18th inst. About three o’clock the same afternoon a person named Robinson, who resided in the neighbourhood, while walking along the road, observed a great quantity of blood, and noticed that some portions of it had been partially covered by dirt scraped from the road. At this moment two young gentlemen, sons of the Rev. Mr. Digby, of Tittleshall, came riding up on ponies, and two ladies in a gig, a Miss Shepherd and Mrs. Digby. The whole party stopped, and their attention was directed to the blood. One of the young gentlemen observed that there was a trail of blood to the hedge, and Robinson jumping upon the hedge, saw that the trail was continued through the fence into the ditch, on the other side, where a horrible spectacle presented itself. The body of Mr. Beha was found with the legs towards the hedge, and the coat collar turned up as if the murdered man had been dragged by his coat through the fence. By the side of the body lay Mr. Beha’s box of jewellery, unopened, but removed from the bag, and his stick and umbrella, and also a large hatchet, such as is used for felling timbers. The blade of the hatchet was covered with blood and hair, and it was evidently the weapon by which the unfortunate man had been murdered. His trousers pockets were turned inside out, and rifled; but in his waistcoat pocket a watch was found, still going. His head had been nearly severed from the body by a blow at the back of the neck, and there were four deeply-cut wounds across the temples and face, any one of which must have caused instantaneous death. The right eye was also driven inwards to the depth of nearly an inch. Indeed the poor man appeared to have been felled like an ox, and dragged through the fence into the ditch. On searching the clothes of deceased more minutely his account-book was found, soaked with blood, in one of his pockets, but the keys of his box were gone. No suspicion was entertained as to the perpetrator of the murder until late in the evening. A man named William Webster, while driving in his cart from Tittleshall to Wellingham, shortly before one o’clock on the same day, had seen a man in the plantation adjoining the ditch where the body was found, and he observed that the man stooped down to hide himself as he (Webster) approached. He communicated this circumstance to the parish constable, stating that the man was William Thompson, a labourer, who lived with his father in the neighbourhood. Thompson, the same night, was apprehended in bed; and parts of his clothes were found to be stained with blood. On further search, a silver watch, with the name “L. Beha” as maker, another watch with the same name, a canvas bag with a third watch, and money in notes, gold, and silver, were found in different places. On the 19th the prisoner was taken before the county magistrates. Several witnesses having been examined he was remanded till further evidence could be adduced. Thompson is about twenty years of age; and his appearance is superior to that which is generally characteristic of his class. He listened attentively to the evidence, but appeared to be quite calm and unconcerned.”

Further reports appeared elsewhere and this tells of the rather horrific end that became of William Thompson:

At the Norfolk Assizes, before Lord Chief Baron Parke, William Thompson, aged 21, was charged with the murder of Lorenzo Beha, at Tittleshall, on November 18th, 1853. Mr. Evans prosecuted, and Mr. Carlos Cooper defended. The prisoner was found guilty, and sentenced to death. The execution took place on the Castle Hill, Norwich, on April 8th. “The criminal’s struggles continued five minutes.”

More detail about these stories and the lives of all of these folk can be found in the Norfolk Studies Library and the Norfolk Record Office and some information is freely available on the internet, but if you are unable to find what you are looking for, do drop me an email and I will be pleased to help.

15 Responses to Murder Most Foul!